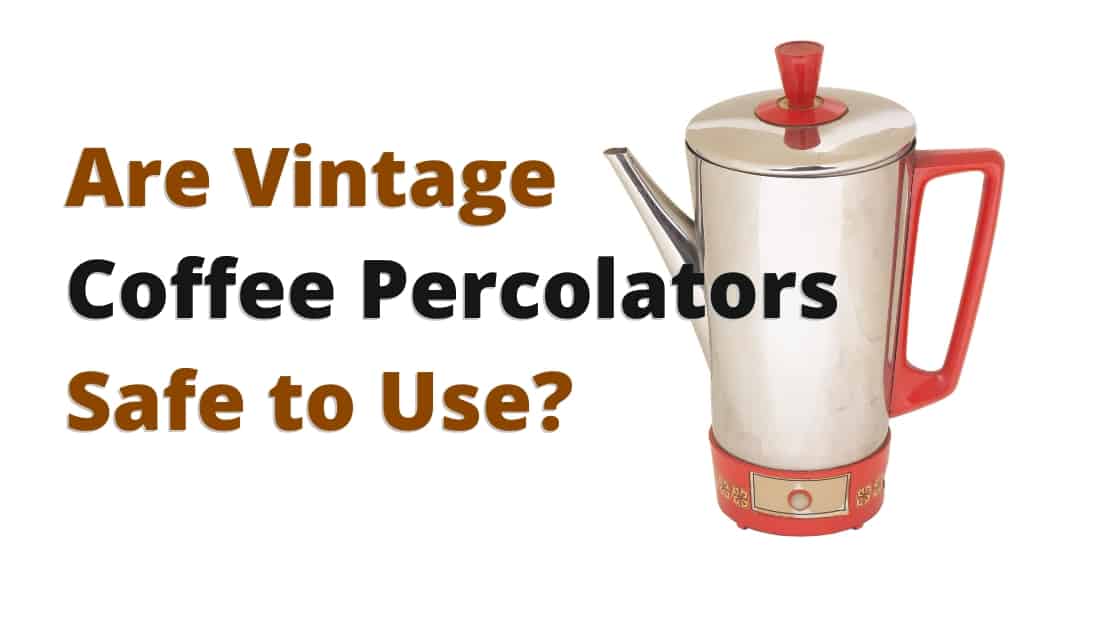 If you are an enthusiast for all things retro, you may have considered buying a vintage coffee percolator but wondered if they are safe to use. There have been massive recalls over the years of many vintage percolator models and it is often even illegal to sell certain models on online retail websites. So, are vintage percolators truly dangerous, or just an example of an overactive public health and safety council?

The reason that vintage coffee percolators are often considered dangerous is due to a design flaw in some brands that resulted in recalls issued from the United States Consumer Product Safety Commission. These recalls were specifically for percolators that had a metal spout and handle and a glass-ceramic pot.

Another safety concern for some electric percolators is that the long cords could be a tripping hazard. If a small child is in the home, they run the risk of tugging on the cord and spilling the burning hot liquid on themselves. As such, a home with children may need to take certain safety precautions if intending to use a vintage percolator to brew coffee.

Many vintage coffee percolators are still considered relatively safe to use and the bulk of the models that you can find today at yard sales and resale shops are still acceptable for home use. If you are curious to find out how you can tell what makes some percolators safer than others, as well as general facts for what makes vintage percolators a unique and fun addition to your home, read on below!

Why Are Some Vintage Coffee Percolators Considered Unsafe?

Specifically, the Corning Glass Works company voluntarily recalled all of its percolators made with metal spouts and handles in 1979. These percolators were considered unsafe because the metal band for the spout and the handle would become separated without warning, which could lead to scalding hot coffee spilling onto the consumer and causing injury.

The faulty seal was due to the epoxy glue that was used to fix the spout and handle to the glass-ceramic pot. Over time, the sealant dries out and becomes brittle, which can cause the unit to separate. Vintage percolators you may find today are even more likely to have dried out epoxy, and so the risk of the percolator breaking while in use might be quite high.

According to the 1979 recall, of the approximately 400,000 of the percolators manufactured in 1974, the Corning Ware company received reports of approximately 1,250 injuries. This means that there were on average only 0.7 injuries per 10,000 percolators sold.

That being said, you may consider that the risk of having an injury from the Corning percolator is relatively low. If you decide you want to take the chance and use a vintage percolator with a metal pour spout and handle, be aware that the risk might be slightly higher as the epoxy sealant might have dried out and become brittle in many of these retro finds and so there may be a higher risk of breakage.

Some older percolators may also be made of or lined with aluminum, which has been shown to leach into liquids. Ingesting aluminum can be toxic and it can accumulate in the body over time, meaning that repeatedly drinking aluminum tainted coffee can have a cumulative effect. Consuming too much aluminum can cause anemia, dementia, and damage your central nervous system.

Why Should I Consider Using a Vintage Coffee Percolator?

Percolators offer many advantages over modern auto-drip systems and pod brewed coffee. First, vintage percolators offer a unique aesthetic charm that is often lacking from modern coffee brewers. Most modern contraptions are mostly bulky hunks of plastic that have little decorative appeal. Meanwhile, vintage percolators can brew you a tasty cup of coffee but still be something you’re proud to show off on your stovetop.

Percolators also have the advantage of being able to keep coffee hot without actually burning it. While most percolators may take longer to brew coffee than a pod-based system, they are comparable to pour over or French press brewing methods. Percolators also do not take any extra effort to use when compared to auto-drip machines.

Another advantage of vintage percolator systems is that they brew robust, strong coffee. If you prefer a stronger brew, a percolator can be a great option. Many percolator aficionados love the rich coffee aroma that percolators produce when brewing, as well.

Occasionally, vintage percolators get a bad reputation from reviewers who don’t understand how to properly use them or have a general bias. The advertising campaigns of the 1960s and 1970s helped bring about the death of the percolator, with many sexist coffee ad campaigns pushing the idea that wives needed to brew certain coffee in certain methods in order to please husbands.

This marketing was fairly successful and led to many homes turning away from the traditional percolator. As such, many American children of today did not grow up with a percolator in the home and it may be a completely novel way to brew coffee. For others, acquiring a vintage coffee percolator for the home may offer a piece of warming nostalgia.

What Are Some of The Best Vintage Coffee Makers?

There are many safe, appealing vintage coffee percolators and pour-overs that can make a great addition to any kitchen.

One of the most famous vintage coffee makers is the all-glass coffee pot by Chemex. Although the Chemex pot was created in 1941, it still has a modern, sleek, sophisticated design that has earned it a permanent display at the Brooklyn Museum, the Corning Museum of Glass, and MOMA in New York. The pot is made from a single piece of borosilicate glass and features a wooden collar and rawhide tie for easier handling.

Another popular vintage pick is the 1970 GE immersible electric percolator. Its stainless steel design is elegant with a thoroughly hip retro vibe. The GE electric percolators are fairly popular, with even some 1950s models still available for sale and able to brew a surprisingly good cup of coffee.

Although some Corning Ware models were part of the large 1979 recall, there are still many vintage models that are perfectly safe and popular among collectors. Corning Ware made stovetop percolators in a variety of sizes and materials. When purchasing, just be sure to note whether the model was one of those recalled. If it is, you can use it for decoration but it is generally not considered safe to use for brewing coffee.

If you are in the market for a vintage coffee percolator, websites like ebay.com and etsy.com offer many different models in varying levels of condition and a wide range of prices.

There is some heated debate about whether a vintage percolator brews a better cup of coffee than modern machines or whether they are better for simply a conversation piece rather than a functional kitchen device.

Because of this brewing method, percolators create a strong, smooth brew in approximately 5 minutes. Percolators, compared to modern drip machines or pod brewing systems, create a creamy, flavorful brew because the water is able to get hotter than the other brewing systems and extracts more flavor from the coffee beans.

Percolators are relatively user-friendly and easier to clean than modern drip and pod-based brewing systems. Once the pot is cooled, simply empty out the leftover coffee grounds and clean with soap and water. If the percolator is an electric model, then you don’t want to submerge any of the electrical components in water and instead simply wipe clean with a soapy sponge and warm water.

If you are someone who desires a single cup of coffee and needs it quickly, a vintage percolator may not be the best option. The percolator will brew several cups at once and usually takes at least five minutes of brew time, not counting any additional time needed to grind coffee beans. A pod-based system is convenient for brewing a single cup in less than a minute with nearly no preparation.

In conclusion, if you are someone who is seeking out a vintage coffee percolator there are many advantages beyond simply the retro aesthetic. Vintage percolators are capable of brewing fantastically hot and flavorful coffee. However, some percolators were recalled due to safety reasons and aluminum lined containers can pose a health hazard, so be sure to select your vintage percolator with care.

Why Buy a Latte Machine For Your Home? For some, starting their day with a coffee is irreplaceable. Silky blends of rich espresso, smooth steamed milk, and a cream micro-foam is quite simply the...

Continue Reading
link to How to Descale a Tassimo Coffee Machine

The Tassimo machine has long been one of the most trusted methods for making single-serve coffee. It’s a fast, convenient way to get a consistently great-tasting cup of joe. Of course, like all...