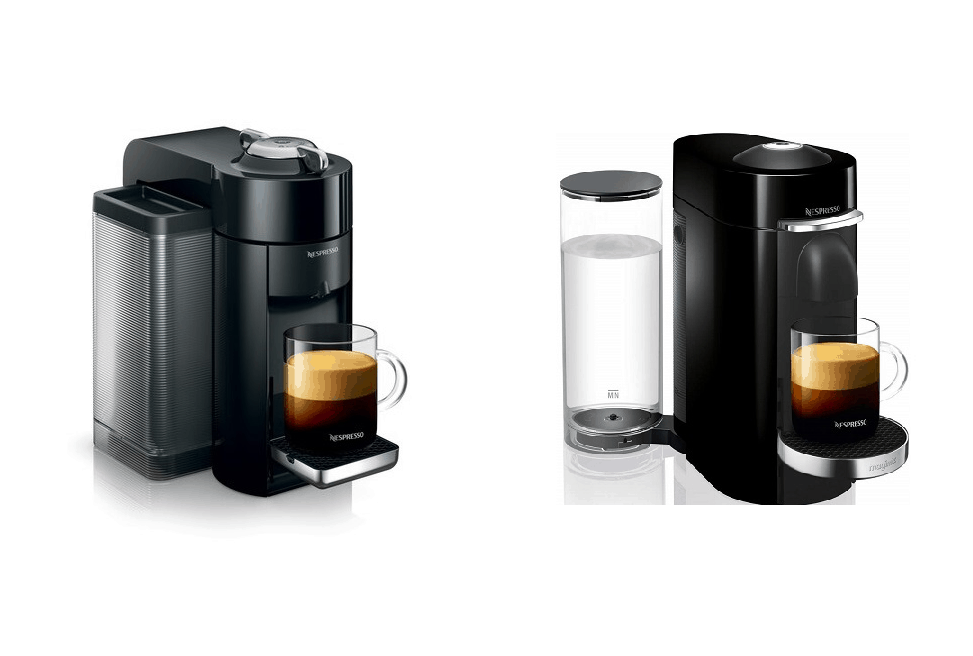 The VertuoPlus and the Evoluo are two of Nespresso’s popular coffee machines. They are similar devices, but each has some unique features that are superior to the other. So here’s the question I’m asking, which is the superior machine

In this review of VertuoPlus vs Evoluo, I will look at the special features, pros, and cons of each device. I will then make a direct comparison of the two to give my verdict on which machine is best. 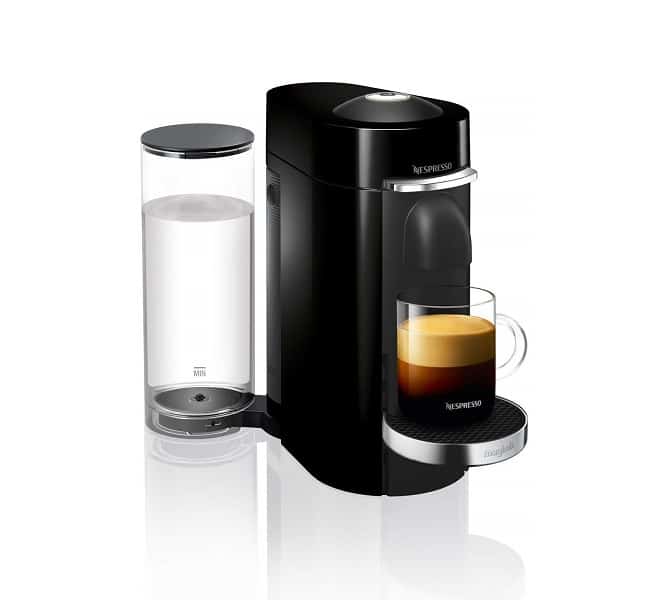 The VertuoPlus machine is a compact machine and is available in three colours; piano black, titan, or silver. Nespresso advertises this machine for people who want quality coffee, no matter the quantity. It will produce freshly brewed coffee with a rich, thick crema, no matter the cup size. The newest version allows for the use of even larger cups, with five different sizes of coffee available.

Customers mentioned that the VertuoPlus is much quieter when running compared to other coffee machines. A feature that users particularly liked was the fact that the device automatically moves the used pod into the bin attached. The ease of use and removal or replacement of the parts was also praised.

Something that a few customers experienced was a problem with the descaling prompt. This is supposed to come on when you need to descale your machine. However, some devices refuse to come out of this mode even after the descaling has been carried out.

Centrifusion technology is a new brewing system developed by Nespresso. This means that the machine identifies the capsule you’re using and automatically adjusts all of the settings to extract the best possible flavour from each pod. This gives each blend its own specific style of coffee.

This is a new bit of technology as well, which works alongside the centrifusion. The intelligent barcode technology is how the device knows which pod you’ve inserted. It then uses the automatic blend recognition to decide what settings it should apply to brew the ideal cup for that blend.

This machine is modernity at its best. All you’re required to do as a user is to insert the pod that’s the correct size for the cup you want, then press two buttons. The first is to close the automatic head, and the second is the one-touch button to start the automatic brewing process. 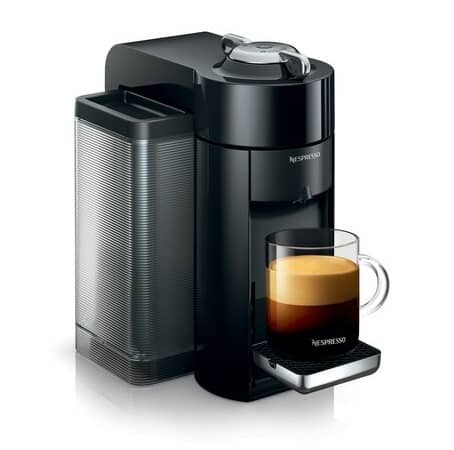 The Evoluo is another compact machine and, again, has a few different colour options. These are slightly more extensive than the VertuoPlus and include the same piano black, titan, and silver, but you can also have graphite metal or shiny red.

Customers said that this machine worked well, but was noisy compared to other coffee machines they’d had in the past. Most users agree that the quality of coffee produced is of an extremely high standard.

One customer did mention that they’d had trouble with a couple of faulty machines. However, they said that the customer service they received was excellent, and both devices had been replaced immediately after developing an issue. A few customers mentioned that they would maybe prefer a little less foam, or that it had overflowed even when filled below the line.

This machine is from the same range as the Evoluo plus, and therefore has the same Centrifusion technology to “gently and fully brew both large-cup coffee and authentic espresso” (nestle-nespresso.com).

It also has the barcode reading technology to allow for blend-specific brewing and produce the perfect cup. This system will adjust five different settings: the temperature, the rotational speed, the flow rate, the size of the cup, and how long the water comes into contact with the coffee.

This particular machine allows for a rapid heat-up time of only 15-20 seconds. This means that you have even less time to wait for that perfectly brewed cup, and you don’t have to compromise with lukewarm coffee when you don’t have the time to leave it to heat before brewing.

VertuoPlus vs Evoluo: Similarities and Differences

So what are the similarities and differences between these two coffee machines?

The VertuoPlus and the Evoluo are both from the Nespresso Vertuo range, and therefore have a lot of similar features. As I mentioned previously, they are both fitted with centrifusion technology and automatic blend recognition. This technique gives both devices the ability to produce five different sizes of coffee.

Both machines cost the same and are reasonably affordable. However, customers noted that the pods for the VertuoPlus were even pricier than the usual espresso pods, increasing the cost per cup even after you’ve purchased your machine.

One of the main differences, although it doesn’t affect the coffee quality, was the noise production. Customers mentioned that the VertuoPlus was particularly quiet in comparison to other machines. In contrast to this, reviews for the Evoluo suggested that this was noisier than coffee machines that customers had used previously. This may indicate that the VertuoPlus is a more efficient device if it’s producing less noise pollution than the Evoluo.

Something that only seemed to be a problem for the Evoluo machine was the overfill of the crema. Customers had issues with the milk foam overflowing from the cups they were using, even if they set the level below the suggested amount for that size.

This was a particularly difficult decision as both coffee machines are so similar, and customers had enjoyed both. Overall, I would have to choose the VertuoPlus as the best coffee machine from this comparison. This is for a few small reasons.

In general, I felt that customers had more positive points to make about the VertuoPlus. They enjoyed how easy it was to remove things like the water tank and pod disposal to fill or empty and then put back. The fact that the VertuoPlus also ran much more quietly when brewing a cup of coffee was just a bonus, but it helped to swing the odds in its favour.

link to Is There A Difference Between A Coffee Mug and A Coffee Cup?

It can seem like the words “coffee cup” and “coffee mug” are used interchangeably. You might feel as if they aren’t interchangeable but can’t seem to put your finger on why.  Coffee...

If you regularly brew your own coffee, you may have wondered what makes bamboo coffee filters different from other paper filters or from permanent coffee filters. Are there any advantages to bamboo...